The famous explorer Colonel John Blashford-Snell seems to have discovered an animal in Nepal that bears a strong resemblance to a Mammoth, two specims have been recorded so far. 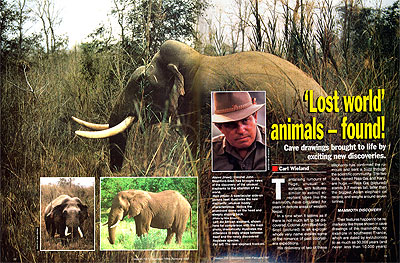 "His discovery of two of these elephants has confirmed the rumours and sent a buzz through the scientific community. The two bulls, named Raja Gaj and Kanji, are huge—Raja Gaj stands 3.7 metres (12 feet) tall, taller than the biggest Asian elephant on record, and weighs around seven tonnes."

The article points out that these may just be 'throw-backs' rather that the surviving herd of the ancient Mammoth herds that used to roam the northern climes before the ice-age.  However if they are throw-backs, it does prove that the DNA of each 'kind' still contains the information to produce feachers long since thought dead, and proof that the Bible's 'kinds' is genetic fact.